Read the ScriptView the Treatment

A college dropout is forced to join his old-school father’s family business: the Illuminati— the shadowy organization of lizard people, politicians and aliens behind every single conspiracy.

In the shadows, the Illuminati have been controlling world events since the dawn of civilization. Illuminati & Son is a dry workplace comedy in the offices of this secretive organization as the downtrodden “Earth branch” of the company influence politics, infiltrate the media, and try to get the damn copier to work. When the Supreme Commander, a Reptilian humanoid named Kleemtor, decides he’s ready to retire soon, he brings in his class clown son KJ to take over the family business. This does not go over well with the colorful ensemble of coworkers, like Smerlox, a fat gray alien, Tabiry, a Cleopatra-type ancient Egyptian, and Senator Jane Pierson, their no-nonsense government liaison. Each episode juxtaposes the Illuminati’s nefarious plans, like political assassinations and Satanic rituals, with the mundane office bullshit that prevents their schemes from coming to fruition— “We’re about to start World War III, but more importantly, who microwaved fish?” 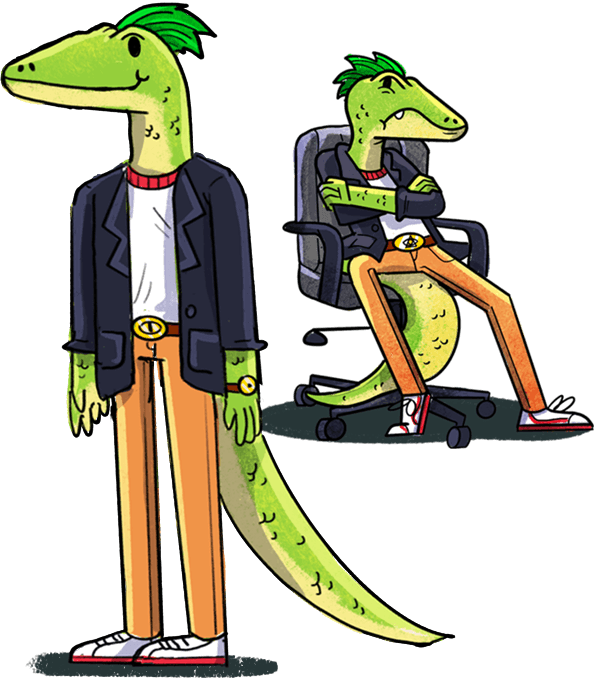 KLEEMTOR JR. (KJ) is the boss’s son and our main character. KJ has never known what he wanted to do in life, but after getting kicked out of Shapeshifting School for some drunken antics, his father Kleemtor forced him to become the Illuminati’s Office Manager. Smart, charming, but often misguided, KJ is always the coolest guy in the room (though this sometimes rubs people the wrong way). If Kleemtor’s ever going to achieve his plan of handing the Illuminati off to KJ, KJ is going to need to grow up– which for him, is much harder than it sounds. 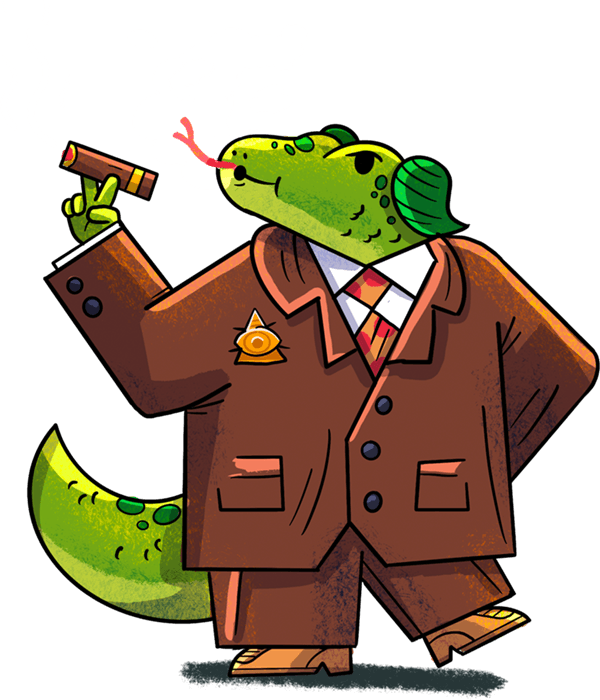 KLEEMTOR is a shapeshifting lizard man that has been the Supreme Commander of the Illuminati since its creation. He’s very old guard, and works hard to keep up his facade as a tough business guy despite actually being a big softy.  Everyone in the office respects Kleemtor, except the one person that really matters– his son, Kleemtor Jr., who he hopes to one day pass the company down to so he can retire. 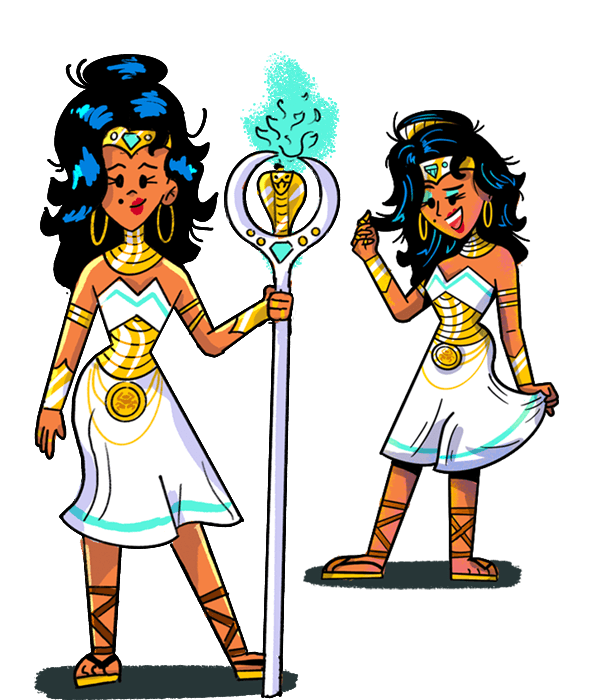 TABIRY is an ancient immortal from Mesopotamia that, besides Kleemtor, has been in the Illuminati the longest. Though she is Head of the Witchcraft Department, she has a bit of a chip on her shoulder and thinks she should be in a senior management position by now. As an eternal being who has manipulated mankind since the Bronze Age, she knows EVERYONE’S drama, and loves to get herself involved in other people issues or spread things around the office. 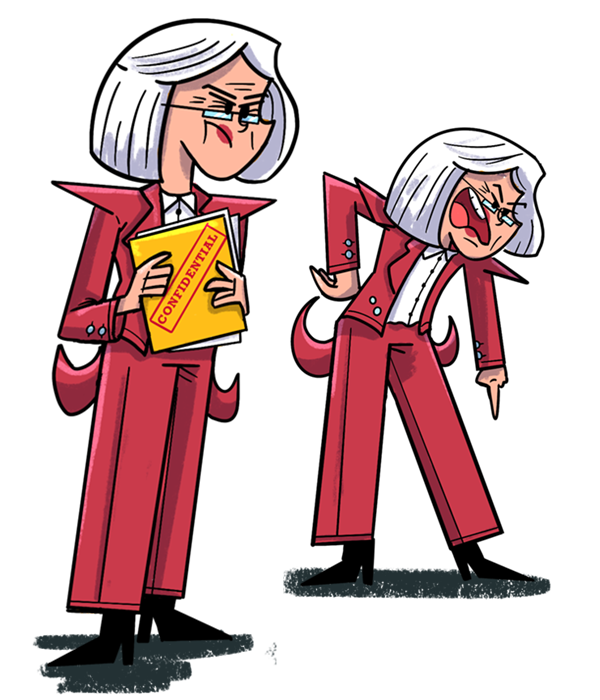 SENATOR JANE PIERSON is the Illuminati’s Government Liaison. If an election needs rigging or a country needs invading, Jane is the puppet master behind it. Despite her being one of the few humans in the office, she is almost the most alien of them all. Ruthlessly focused on efficiency and work ethic, she speaks bluntly and deliberately, and will not hesitate to stop the fun if coworkers are goofing around. Although her world outlook and work responsibilities can get pretty dark, Senator Pierson lights up about two things in life: her All-American, white-picket-fence family and her role in creating a New World Order. 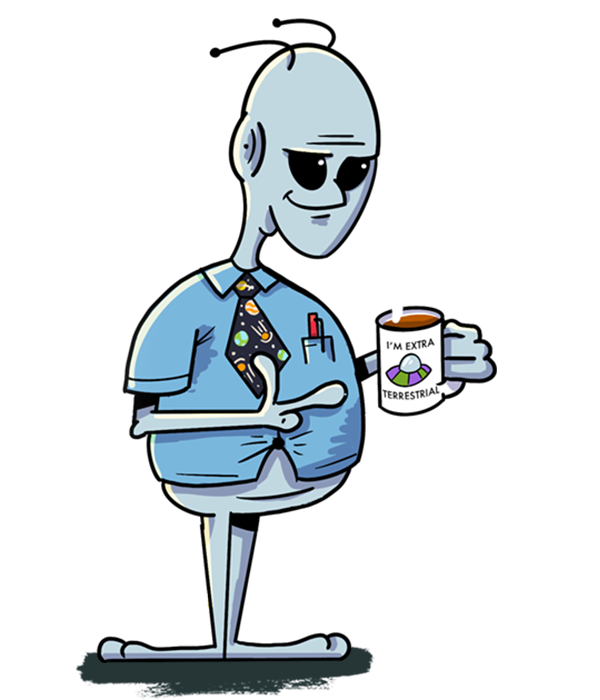 SMERLOX is your typical grey alien that got super comfortable and packed on some extra pounds. Standing at 4 feet tall and hailing from the Zeta Reticuli star system, he’s the Alien Overlord in charge of supervising abductions and human experiments. Though he’s both physically and personally disgusting (extreme weird uncle vibes), he just wants to be well liked, and his wildly fluctuating confidence often makes him say things that are “too much” for the office. As an alien, he DOES bring a lot to the table– something he won’t let you forget when he pulls rank to unnecessarily involve himself in Illuminati operations.

MACAULAY CULKIN –yes, THE Macaulay Culkin– is the Illuminati’s resident Hollywood Elite in charge of brainwashing the masses. As the Lead Media Influencer, he sounds like a cocaine-fueled network exec, excitedly spitballing new ways to hide satanic and subliminal messages in pop music or movies. If you look by his feet you’ll see all the names he won’t stop dropping. The only thing Macaulay loves talking about more than himself is all the celebrities he’s converted to lizard people.

MOLE MAN is the happy-go-lucky receptionist and a literal mole man. Content to just clock in and clock out, he’s a mole man of simple tastes, and his kind and Dad-joke-loving personality has turned him into the office therapist when anyone needs to vent. He’s the glue that holds the office together–– if you make an enemy of Mole Man, you make an enemy of everyone.

SARAH THE INTERN is a normal human intern who works tirelessly at the Illuminati with hopes of getting a job after graduation— or so she thinks. In reality, she’s a clone of the original intern Sarah, with the idea of future employment implanted in her head to get her to work for free.

Illuminati headquarters may seem evil on the outside, located on a volcano lair on a remote Pacific island, but inside, it’s something far more sinister: a boring corporate office. The island itself is uninhabited except for the workers who commute in from various governments, underground lizard caverns, or even space (via the erupting hole at the top, which acts as a garage door). If this office had windows, the view would be beautiful, but instead, everyone is stuck looking at volcanic rock, motivational posters, and the occasional human skull.

THE ILLUMINATI ARE LIZARD PEOPLE

THE ILLUMINATI ARE LIZARD PEOPLE

KJ struggles to understand his new job as office manager when he’s told he’ll be planning a birthday party for Tabiry despite really expecting to be plotting world events. Meanwhile, the rest of the team is working around the clock to try to resurrect Hitler, until KJ throws a wrench in that operation.

Everyone at the office is slumped over their desk, hungover from a Hollywood party Macaulay took them to last night, when they get a call from the Antichrist that he’s going to be out running errands all day so he’d like to stop by to see how the plans are going. As Smerlox helps the Antichrist leisurely run apocalypse-related errands, the office is in absolute panic because they are nowhere near ready with bringing about the end of the world.

THE ILLUMINATI ALTER THEIR APPEARANCES

THE ILLUMINATI ALTER THEIR APPEARANCES

As we all know, Paul McCartney and Avril Lavigne have been dead for years and are now replaced with lizard people. A new pop group is getting pretty big, so Kleemtor uses this opportunity as a team building exercise, packing everyone in a bus to go kill this band and exchange their bodies with Reptilians. Mole Man misses the bus, and waits in the office, nervous about showing everyone his new haircut.

THE ILLUMINATI MANIPULATE THE INTERNET

THE ILLUMINATI MANIPULATE THE INTERNET

It’s the 20th anniversary of 9/11, and the Illuminati has been planning for years to drop a HUGE clue that everything is connected. Everything is waiting on a single email confirmation to go out– but the internet goes down. The entire office scrambles to identify the problem as they watch KJ, in human form at the live TV event, try to delay to their deadline as much as possible. It’s revealed that this was an in-office false flag operation done by Tabiry, where she deliberately unplugged the router so that she could then plug it back in and save the day for a promotion.

The first season of Illuminati & Son follows KJ as he finds ways to contribute to the team while still fulfilling his important-but-limited role as Office Manager. He learns the value of hard work, and at the end of the season, when the Earth branch is on the brink of closure due to repeated failures, KJ’s ingenuity saves the day. This results in a promotion to Assistant Head of Abductions, a role where he will be able to spread his wings more– although it comes with even more responsibility.

As the seasons continue, KJ will continue to work his way up as he learns to run a company (and the Earth). Smerlox’s life goes tragically downhill as he blunders through a divorce and finds himself in a love triangle with Senator Pierson and his old pal KJ. Tabiry dates around in a constant pursuit over someone to fawn over, and ultimately ends up marrying Macaulay Culkin, who is in constant need of attention.

The Earth branch of the Illuminati constantly fight to stay in business, staying one step ahead of being shut down, but never quite achieving total world domination.

The show will ultimately lead to the point where Kleemtor steps down and hands the company over to KJ. This time it doesn’t feel like KJ was just given a job by his dad, but rather he earned it. 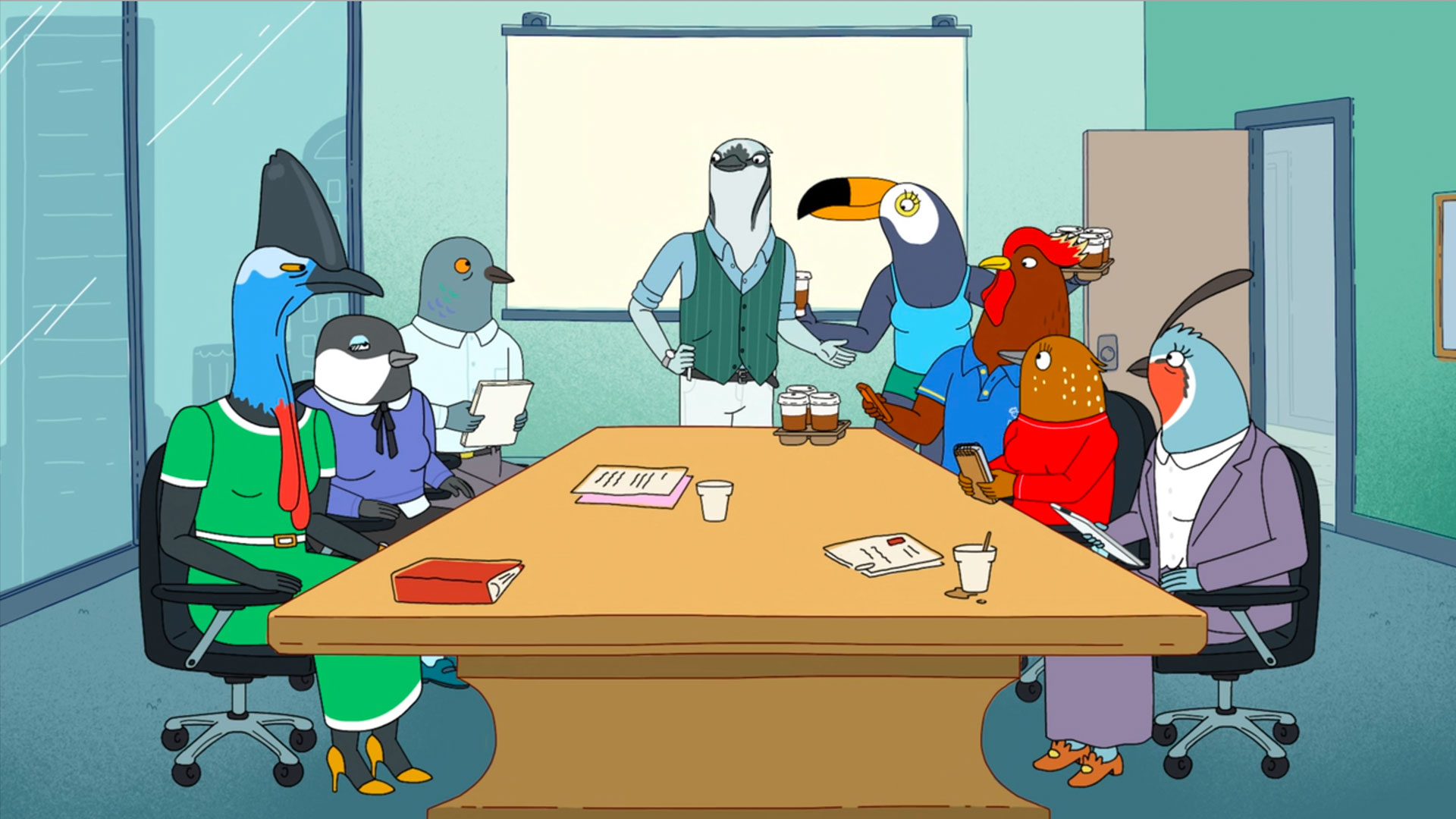 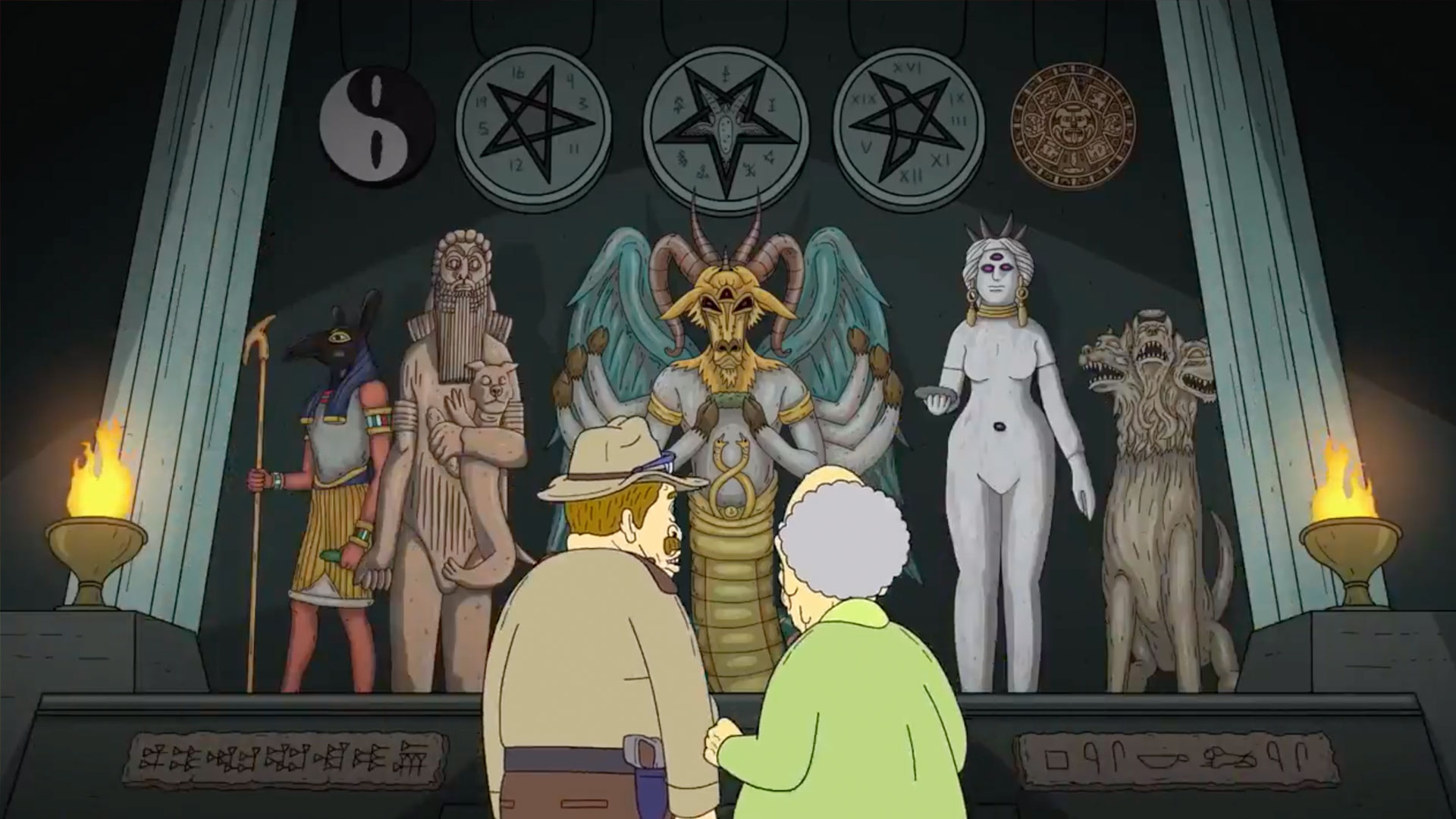 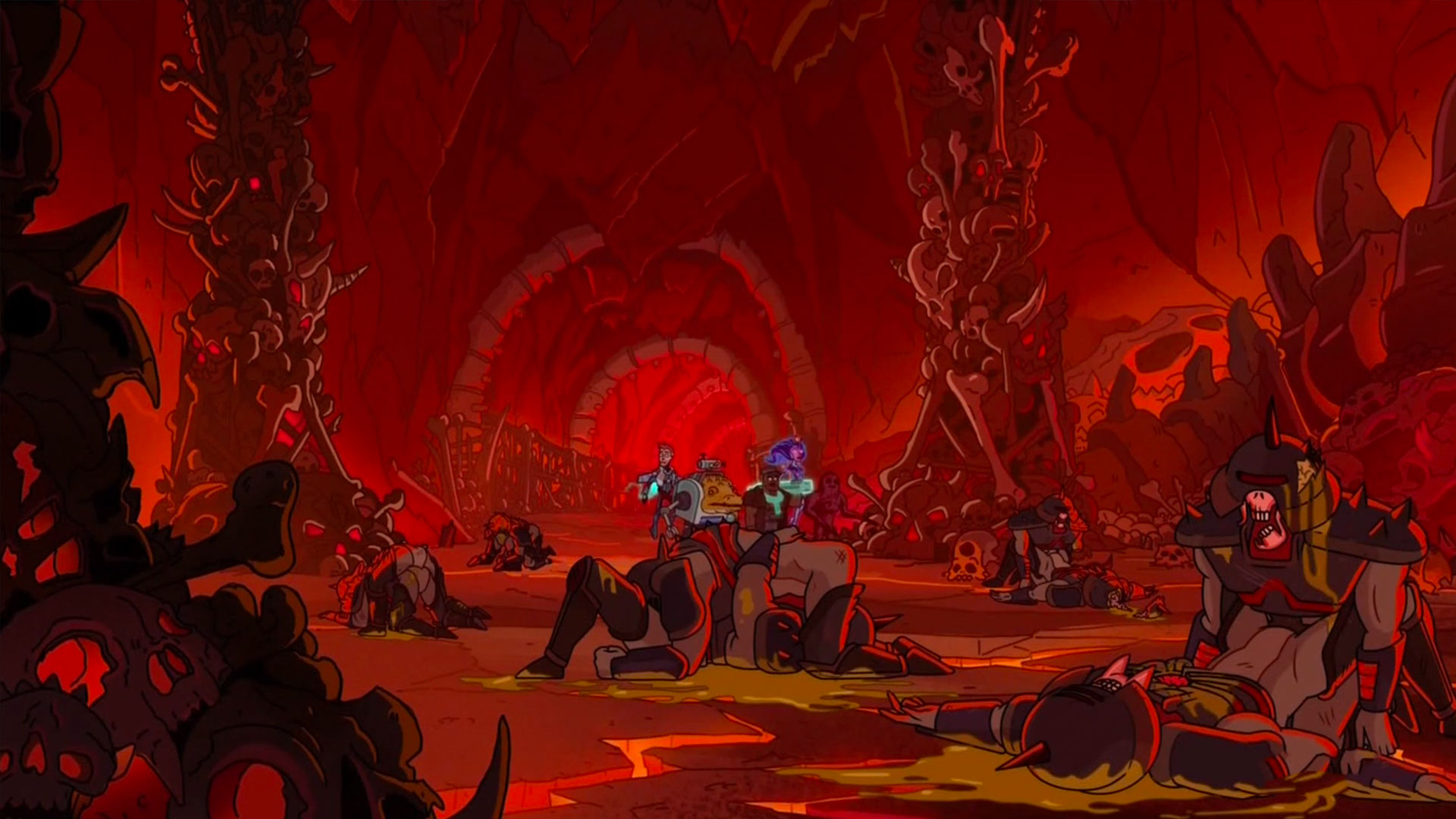 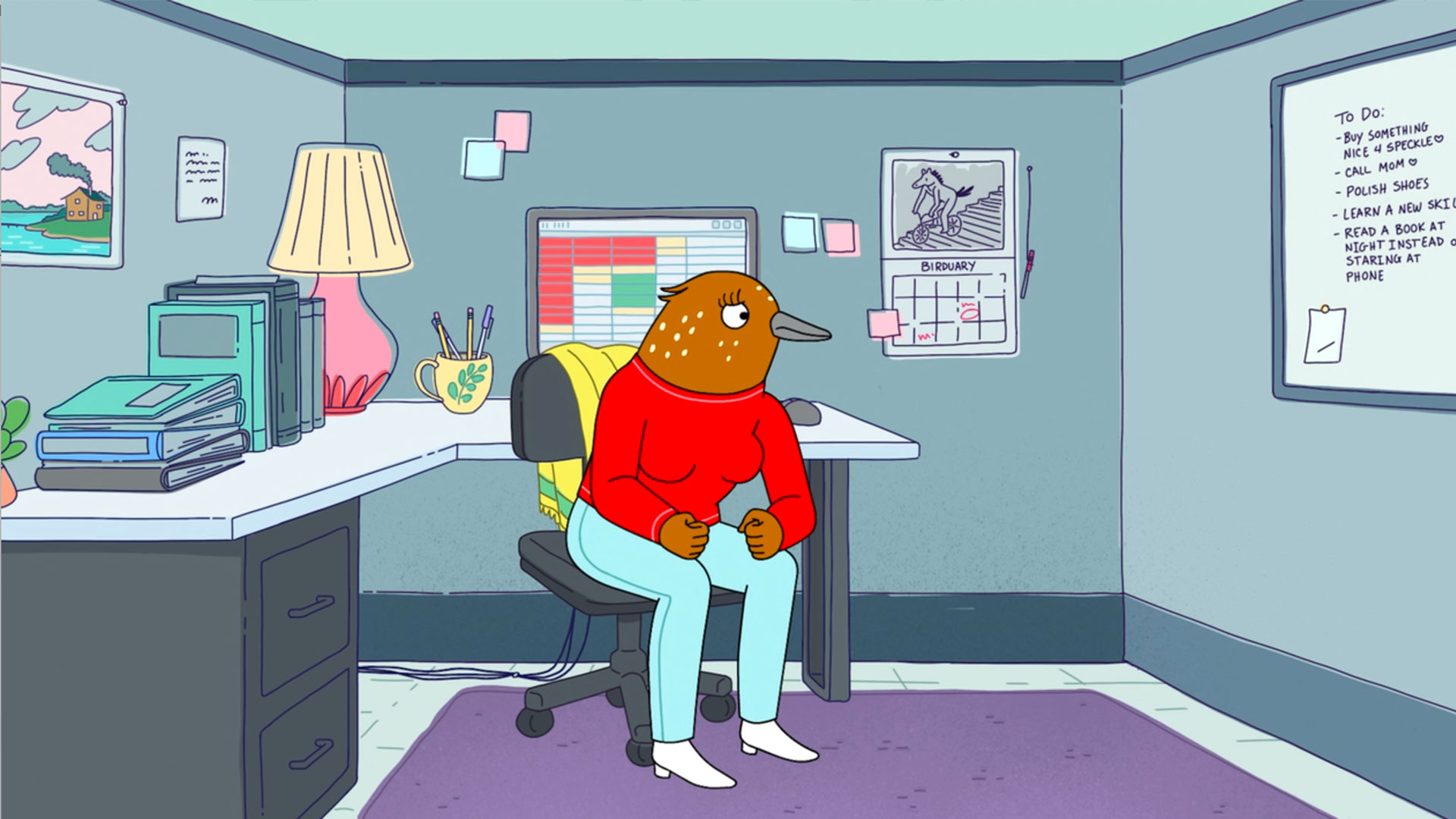 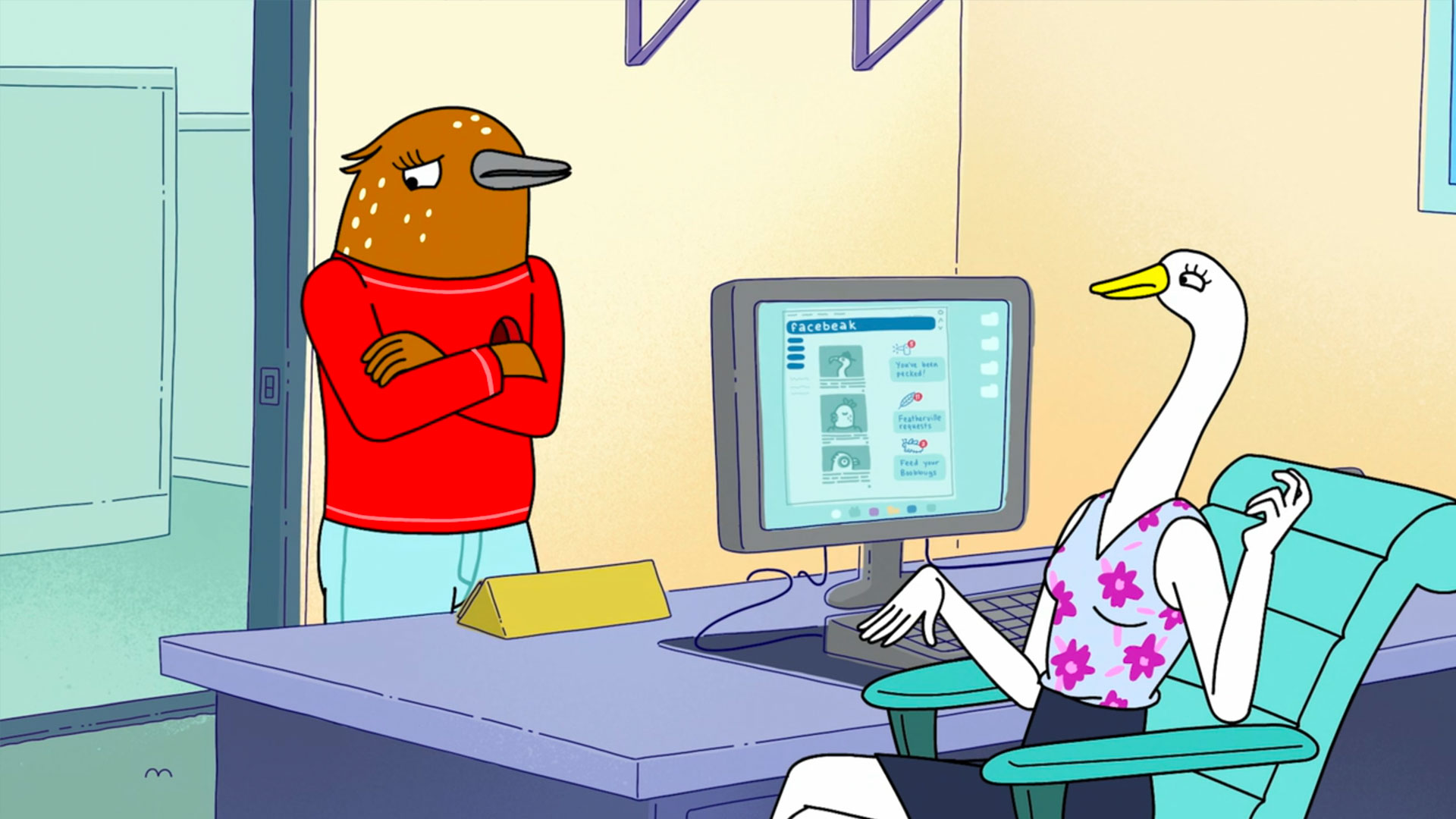 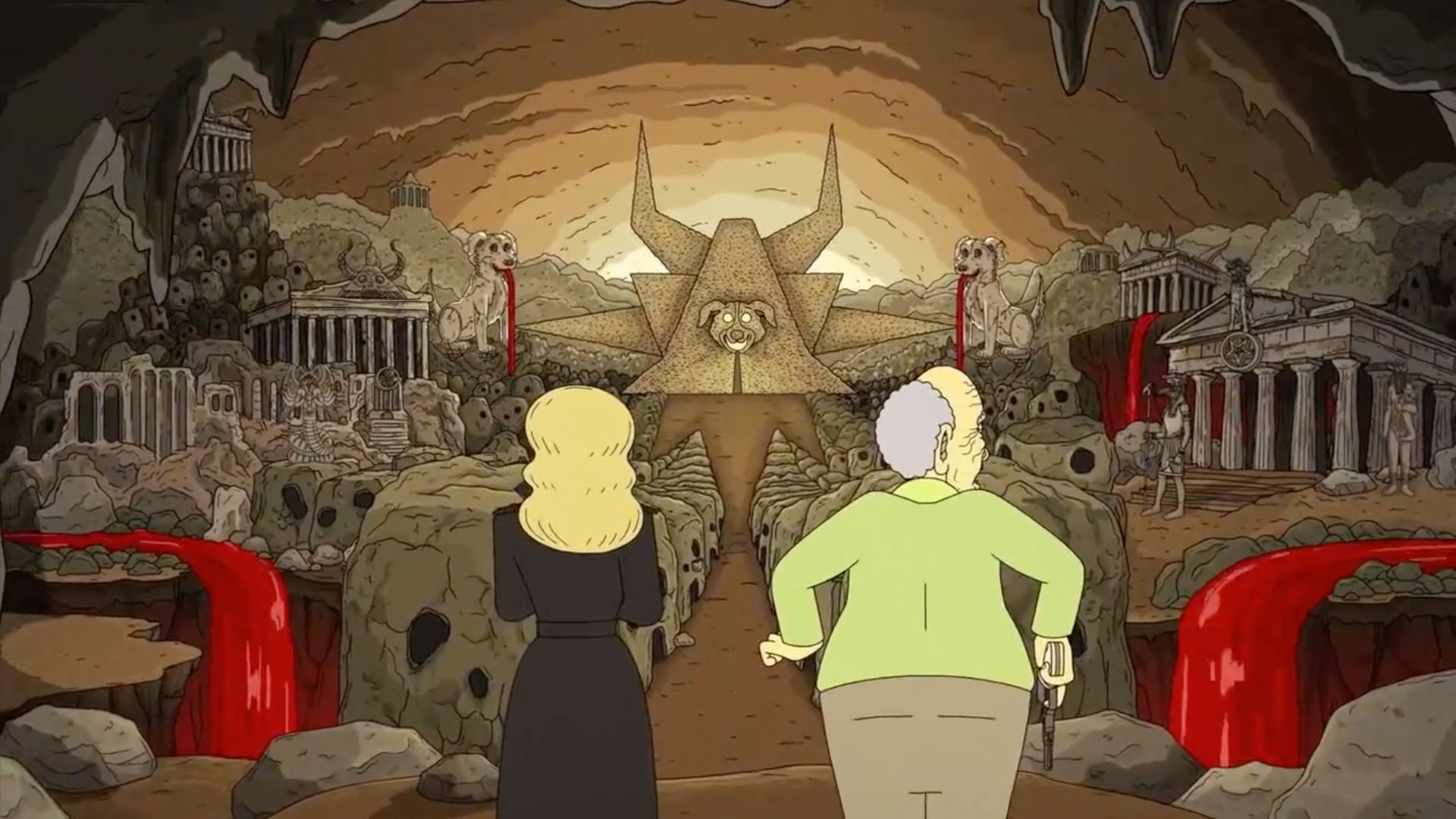 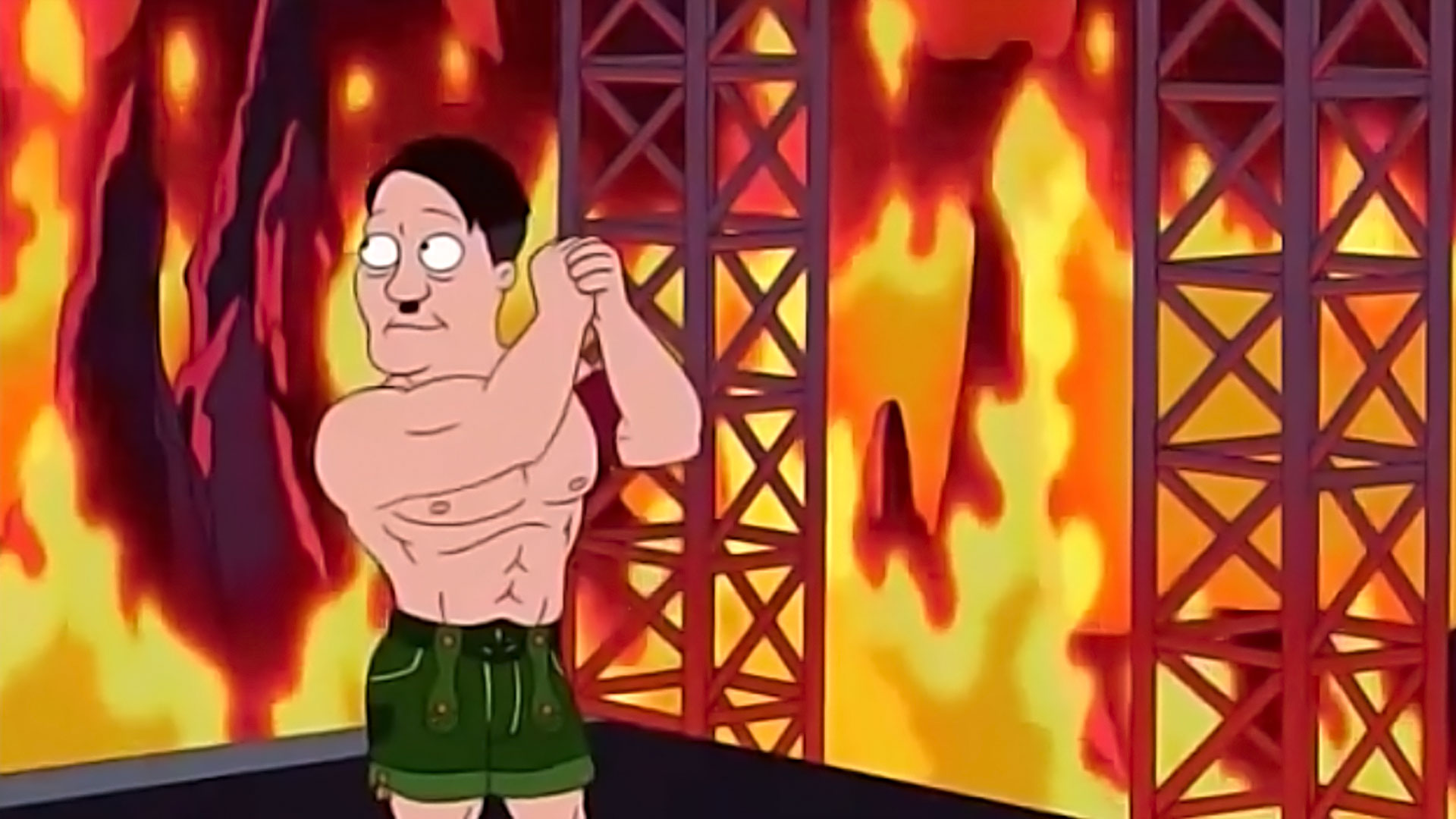 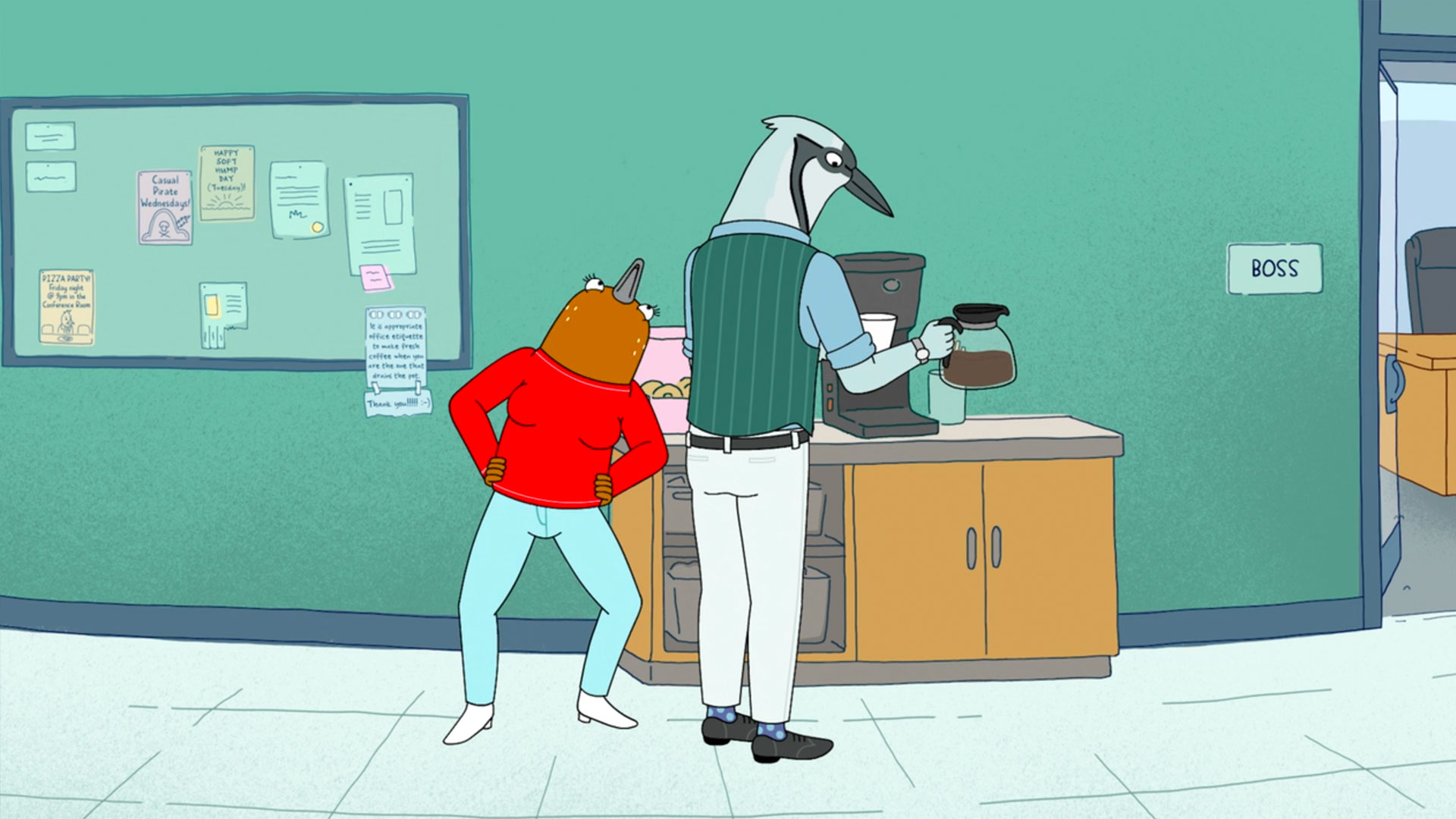 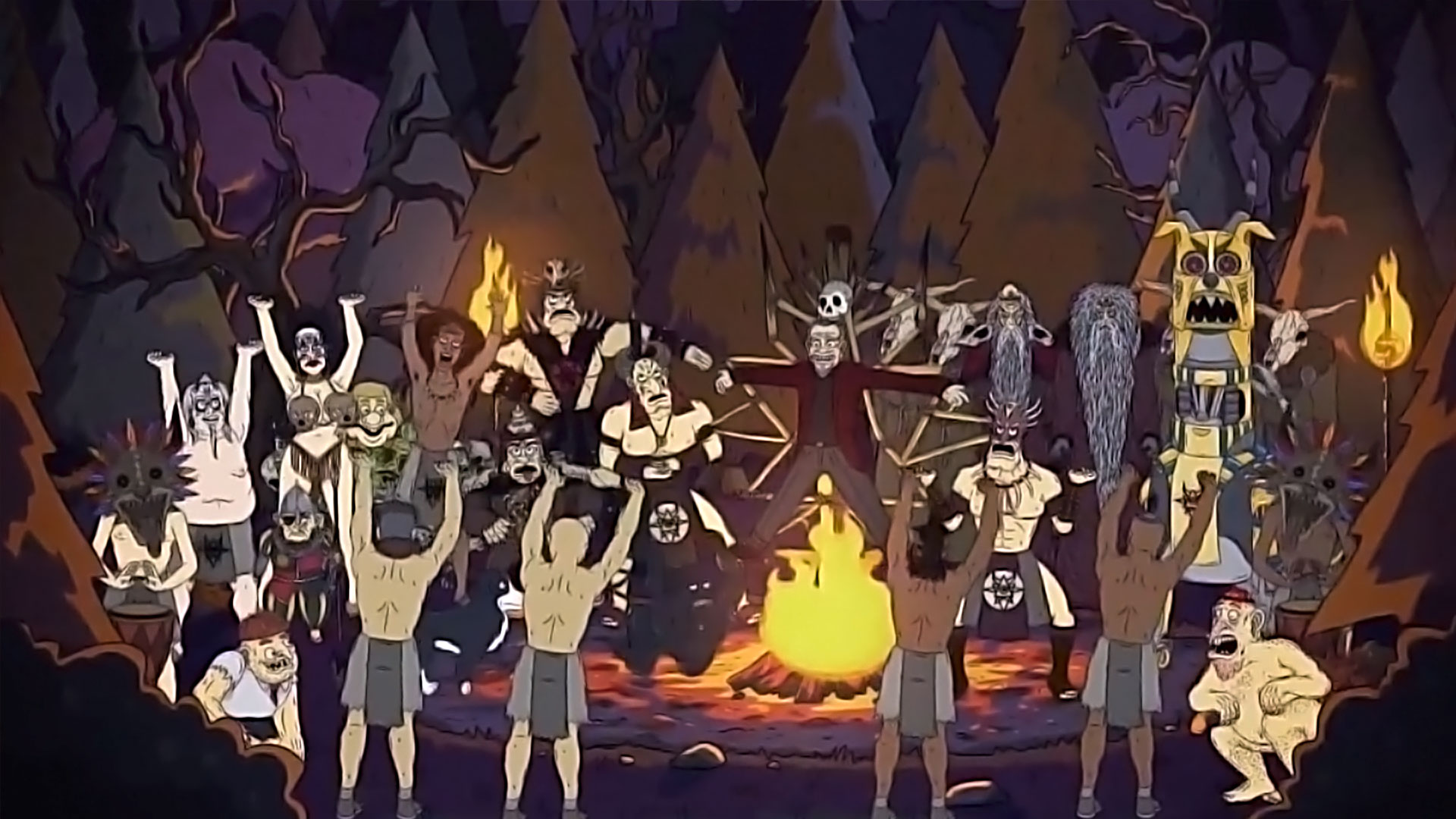